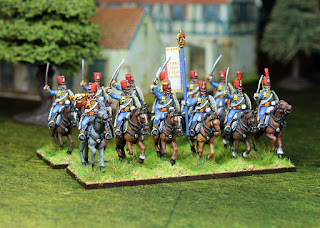 A new addition to my Napoleonic French army. These are 20mm hussars from Newline Designs, painted to represent the 5th regiment. They originally started off life as the 1st regiment, but I decided to change them to the 5th, which is more or less the same uniform colour except the 5th have a white pelisse rather than blue. 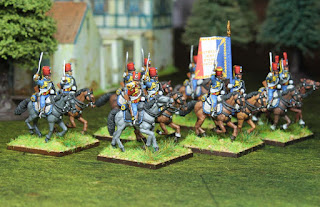 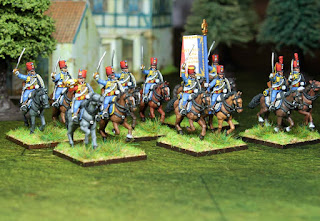 For reference I used mainly the Osprey book, 'Napoleon's Hussars', supplemented by internet searches. Hussar uniforms and their details and variations are a bit mind-boggling, and I'm sure there must be some inaccuracies in my painting. I'm not entirely sure, for example, if the shako cloth was actually red. I found some images that showed red, and others that showed blue. In the end, I do as I always do, which is to go with what I think looks best! 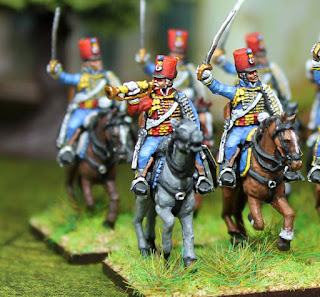 Probably my favourite figure from the unit is the bugler. Again, not sure if the red dolman is correct or not, but I really like how the yellow froggings stand out on it.

It was all going so well until I realised early on that I'd glued the officer to the wrong horse. You can see the correct horse above with a trooper on it. Try as I might, the trooper could not be tempted to climb down off his steed, and both man and horse were in danger of ending up in the casualty tray if I'd persisted with my pliers-based persuasions. In the end, I decided to let the happy fellow keep his prize. He could either be the gallant soldier returning the lost beast to its rightful owner, or the scoundrel riding off with his ill-gotten gains.

The slight horsey confusion aside, I'm pleased with how this lot turned out. Hussars are a lot of work, and this 5th regiment felt especially challenging with the yellow froggings. But, it was worth the effort and I'm delighted to have this new addition to the army.

I think I might have to paint something easier next. A unit of Pictons, maybe?
Posted by weepaintedmen at 1:30 PM 8 comments:

With the 44th East Essex more or less done for my 20mm British army, I will stay with the 9th Brigade and paint either the 44th Black Watch or the 92nd Gordon Highlanders next. Before that, though, I'll be jumping back over to the French army to paint up a unit of hussars - the 5th regiment. My French army has a distinct lack of light cavalry at the moment, which needs to be remedied!

First, something a bit less flamboyant...and Napoleonic miniatures probably don't come any less flamboyant than Picton at Waterloo. If only more generals dressed this way. It would make the life of the wargames painter much easier!

I like this sculpt from Newline Designs. It seems to capture Picton's famous temperament very well. 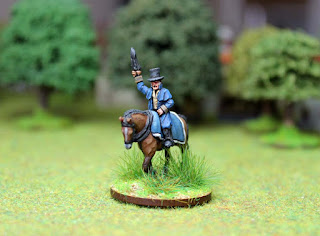 Posted by weepaintedmen at 9:58 AM 3 comments:

As promised, here are some photos of my 10mm Napoleonic French. As with the Austrians, these are all Pendraken figures except for the horse artillery, which is Magister Militum.

Some of these figures are from a while ago, when I was pretty new to Napoleonic gaming, so the uniforms are probably not the most accurate. The army is still a work in progress, probably not quite as far on as the Austrians. You can see I still have flags to add for some of these.

Posted by weepaintedmen at 7:59 AM 2 comments:

I've mentioned my collection of 10mm Napoleonics a couple of times in passing, and always meant to share a few pictures on the blog. It's still very much a work in progress, a project I tend to dip in and out of every now and then. The forces (Austrian and French) are almost at a useful size now for small games, but I plan to add lots more as time goes on.

A fellow blogger was asking me about them, so this gave me the much-needed nudge to get finally get the camera out. Here are some photos of the Austrians first of all. It's not all of them, just a sampling of some of the different troop types.

Almost all of the minis are by Pendraken, with just the horse artillery by Magister Militum. I like both ranges, and even though the MM ones are slightly bigger/chunkier, you don't really notice once they're on the table.

For those who are interested, I use 15x20mm bases for my infantry and 20x20mm for cavalry. The buildings in the background are from Total Battle Miniatures' 6mm range (and rather lovely they are too!). I also have a few of their 10mm buildings but haven't got round to painting them all yet.


Posted by weepaintedmen at 7:39 AM 6 comments: 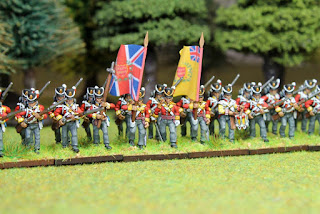 My first unit of Napoleonic British is now finished! These are painted to represent the 2nd battalion of the 44th East Essex, which was part of Pack's brigade at Waterloo. Hopefully I got most of the uniform details correct, although I'm starting almost from scratch as far as my knowledge of British uniforms goes. I think I'm right in saying drummers didn't wear reversed colours by the time of 1815 (officially, at least), but I decided to go with the yellow jacket anyway for the sake of variety.

Figures are by Newline Designs. Flags are from warflag.com 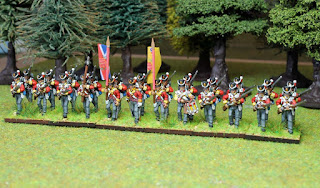 I originally intended to go all out and paint a 36-figure unit, using 6 bases of 6 figures, but I changed my mind at the end and switched back to my usual 24-man unit on 4-figure bases. As a result, I still need to add a couple of flank companies, so I'll probably swap out two of the bases at some point and repurpose them for a different battalion, once the flank companies are painted. 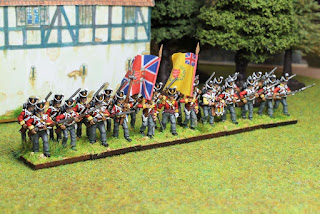 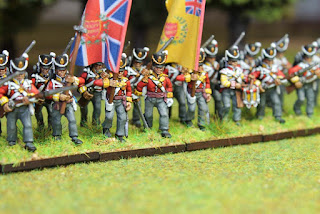 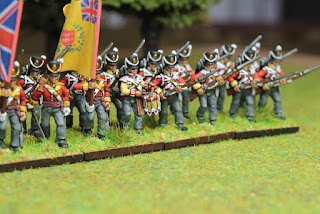 I'm keen to dive straight into another unit of British, but can't quite decide what to do next - lots to choose from. I'm very tempted to stay with Pack's brigade and paint the Black Watch battalion next. Time to put a brew on and have a think about it...
Posted by weepaintedmen at 11:15 AM 12 comments: 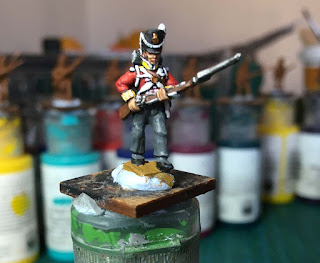 So, my plan to start painting some of the other nations from the Napoleonic Wars - notably the British and their allies - has finally started. I originally intended to get stuck in at the start of this year, but distractions with terrain projects and other things got in the way.

Foremost among those 'other things' is, of course, the current situation with the pandemic - an anxious time for everyone, to put it mildly. Although far from normal, life has slowly settled into a new routine here in the Wee Painted Men household. Both me and Mrs Kev are able to work from home, for which I'm extremely thankful, and both of our incomes are, for the time being at least, relatively secure. I do still worry about elderly parents and close family members working 'on the front line', but just hope and trust that we will all be ok.

I'm gradually getting into a healthier daily habit which doesn't involve being glued to some 24-hour news feed or other. Keeping up with details of every unfolding event seemed vital at first - even obligatory - but eventually it just became all-consuming, not to mention utterly depressing. Things like painting toy soldiers were put firmly in the back seat, but I soon realised that keeping up the ordinary, day-to-day hobbies was important. The fun stuff is what helps you through bad times.

Over the Easter weekend I had a go with a couple of rulesets using my French and Prussian collections. The first was Field of Battle (mentioned in my last post) and the second was Waterloo, the now out of print game published by Games Workshop. Of the two, I had the most fun with Waterloo. So much so, in fact, that it suddenly ignited my enthusiasm for getting out my big lead pile o' British troops from Newline Designs.

I'm sure I'll be talking more about the Waterloo rules (written by Mark Latham) in future posts, and I hope to put together a few battle reports. In the meantime, I'll be pressing on with this first unit of British line infantry, which I've decided to paint up as the 44th East Essex. I have the idea of doing a few battalions from the 5th (Picton's) Division from 1815, and the East Essex seemed like as good a place to start as any. I painted this first miniature to completion just to get my bearings with the uniform, and I'll be doing the rest of the unit in larger batches next. (I'm not sure yet whether I'll paint the regiment's number on the back of the napsack or not.) 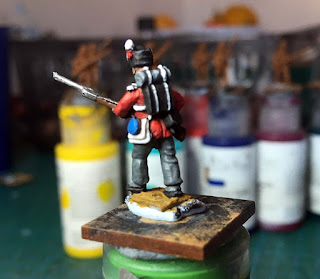 All this doesn't mean I'll be abandoning the French or Prussian collections - far from it! Both of those armies still have units I want to get painted, so expect me to be jumping around between nations for the forseeable. I may even be doing a (big) bit of rebasing if the Waterloo rules continue to hold my interest. And there's still the terrain collection to be improved... 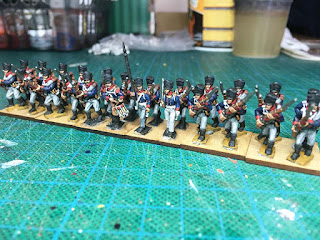 It's been a bit quiet for me recently on the hobby front. The hex terrain project I mentioned in my last post only got so far before my enthusiasm hit the buffers. I may return to it at some point, but at the moment I'm still searching for terrain ideas and inspiration.

I did manage to reorganise my hobby room so that I now have a permanent 6 x 4 foot table set up, which feels like a great luxury - even if my battlefields are still rather sparse!

I've also been reading a lot of Napoleonic rulesets, trying to find one that might be good for solo play and which is not hex-based. Although Commands & Colors is my favourite game to date, I would like to have a more traditional, non-gridded look to my games sometimes. Field of Battle by Brent Oman is the current forerunner, so I think I'll spend some time trying out those rules over the Easter weekend. Hopefully a standard 6 x 4 tabletop will be big enough for a decent sized game using my 20mm collection.

In the meantime, I decided to paint up some more Prussians from the lead pile. I still need to finish the bases and attach the flag, but it's nice to have another unit of musketeers added. I now have enough for five such 24-fig units, with another unit half done. 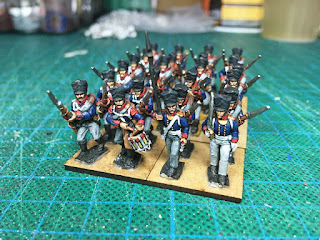